PRETORIA – The family of Johannesburg model Gabriella Engels, who made headlines in 2017 after laying assault charges against Zimbabwe’s then-first lady Grace Mugabe, on Friday said they will continue to press for charges and not money.

Speaking to the African News Agency (ANA) at the North Gauteng High Court, Gabriella’s mother Debbie said a cash amount had been made available by the Mugabes, but that the option will never be considered.

“You can’t buy justice. You cannot just give a sum of money and my daughter is supposed to heal and just accept. At the end of the day, my daughter still doesn’t know why this woman (Grace Mugabe) came and attacked her from nowhere,” said Engels.

“All the stories that have been circulating, that my daughter attacked Grace, it is utter lies. There are witnesses that were in the room. They say this woman just barged into the room and hit her (Gabriella). We want to know why she did that.”

Engels insisted that the financial offer will not silence her family.

“You can’t put a child through trauma and then come and just give her a certain amount of money, expecting that child to go on with her life. The trauma must be washed away with money? That’s not how it works. My child needs that closure,” said Engels.

“She (Gabriella) needs to hear from Grace Mugabe as to why she did what she did so that my daughter can heal.”

She vowed that her family, now represented by civil rights group AfriForum, will explore every avenue to ensure that Grace Mugabe has her day in court. 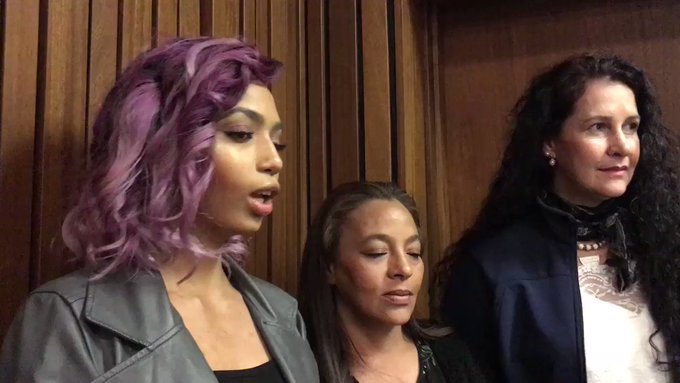 “We will definitely be continuing with the criminal case. At the end of the day, all we want is for Grace Mugabe to come stand in the dock. She must come answer as to why she attacked my daughter in the first place,” said Engels.

She said if, in the end, the swanky Zimbabwe’s former first lady gets sentenced for the assault with intent to cause grievous bodily harm charge opened by Gabriella last year, “it will be a bonus”.

Earlier on Friday, the North Gauteng High Court on Friday reserved judgment in the DA’s application to have diplomatic immunity granted to Grace Mugabe set aside.

On Thursday, Advocate Hilton Epstein, SC representing the Department of International Relations and Cooperation (Dirco) argued that the South African government did not grant diplomatic immunity to Mugabe, but only recognised it after the 2017 assault charge.

Epstein argued that Pretoria had not conferred the diplomatic standing, but that Dirco had only upheld the fact of existing immunity for then Zimbabwe president Robert Mugabe’s spouse.

“I submit the following – it is clear this was happening over a short period of time. The department of foreign affairs [international relations] department was dealing with this urgently, the conference [Southern African Development Community (SADC) summit] was taking place, heads of state were here and the minister was faced with the complaint and sought advice,” said Epstein.