Grace Ntombizodwa Mugabe (née Marufu; born 23 July 1965) is the second wife of former Zimbabwean President Robert Mugabe. She served as the First Lady of Zimbabwe from 1996 until her husband’s resignation in November 2017. … She was expelled from the party, with other G40 members, during the 2017 Zimbabwean coup d’état. 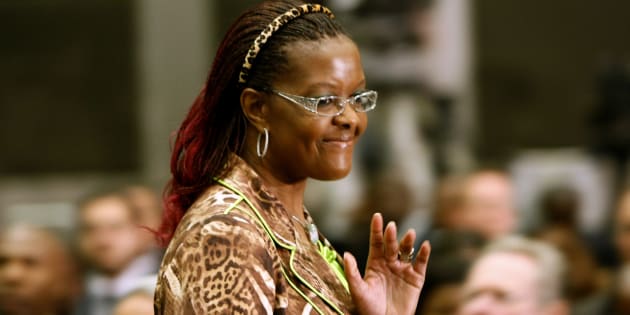 VANCOUVER– All is not well with former Zimbabwe first lady, Grace Mugabe’s health, amid top secret disclosures last night from government insiders and a foreign medical practitioner, that her battle with an appendectomy operation in 2015 in Singapore is failing, and that it could be a matter of days before she loses the fight, Spotlight Zimbabwe, has been told.

There are also local online media reports that Grace and his husband former president, Robert Mugabe, were flown out of the country yesterday on a State chartered plane back to Singapore for medical attention, as both of them are in dire health conditions. Speculation was rife that Mugabe’s life is in danger, but it turns out that Grace is the one fighting for her life.

Three years ago, Grace spent several weeks in Singapore, reportedly for an operation to remove her appendix, yet the private Zimbabwe Independent newspaper, citing family sources, said she actually had surgery for colon cancer.

Colon cancer is a very dangerous ailment, which claimed the life of the country’s former prime minister, Morgan Tsvangirai, in February this year. Tsvangirai died in a South African hospital at the age of 65.

“The truth is not being openly told,” said the doctor based in Hong Kong. “Mrs Mugabe is very ill, her days are numbered. She was told back in 2014 by her specialists that she had little time left. The people of Zimbabwe might be shocked to witness Mugabe burying his wife. You are a christian nation, and this is the time your prayers are needed for your first lady.”

Other government informants in the capital said the former first lady was strong and had been putting up a brave face all along, “but she is in pain”. President Emmerson Mnangagwa is footing the former first couple’s medical bills, and has directed that their air travel arrangements to their Singapore doctors be upgraded.